The veteran law dog smoothed his white mustache, and trained his blue eyes on me.
They were lit by anger decades old, and frustration.
He was a new follower of the Jesus who leads me,too, and was struggling furiously with the ideas of forgiveness, and loving his enemies.
The more he read in the new Bible he'd brought to the little home group, the clearer it became:
he could not escape this instruction. And it made no sense to him, at all.

He first put on a badge during riots; he'd fought and won in three gun battles on the streets of Los Angeles, and seen bank robbers roll past the branch where his detail was posted, to start a little war outside another.
He'd been to far too many funerals.
When he 'retired', he started another career working with and watching the back of a rural marshal who valued his loyalty and years on the road.
He was a deputy, a friend, a brother who would willingly kill or die to protect the defenseless, and those whom he loved.
He was a warrior, and the father of warriors.
And he was a Christian now ; reconciling all those pieces wasn't coming easily.

"Why should I forgive them? Pray for my enemies?
They tried to kill me. I survived because I was angry, because I could fight back.
They don't deserve to be forgiven." 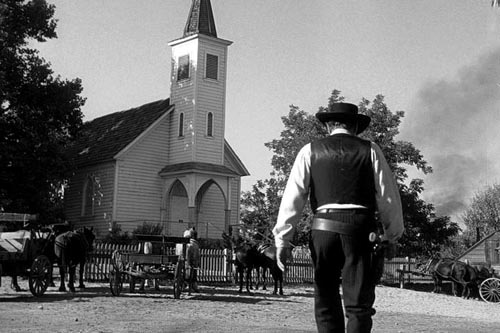 And he was right.
I've heard the same from other officers: some betrayed by those they trusted--family blood or blue,
some broken by the work they undertook so eagerly, now in pain, too often alone, crippled by bitterness and disappointment as much as by bullets, or tons of high speed metal and wheels.

I knew the right answers, and I could find the passages from the Sermon on the Mount,in both Matthew and Luke :
pray for your enemies. Love those who hate you.
Forgive others so you can be forgiven, because the measure you use will be the one the Father uses to measure out your own reward. I could move on to New Testament letters, reminding me that because Christ forgave me, I have no right to withhold my forgiveness from someone else.
I'd read all that.
So had my confused and angry friend.

He understood command structure, and this was a command : Forgive. Pray. Love.
Police work is paramilitary; an imperative was familiar ground, like it was for the Roman commander who asked Jesus to heal his dying servant--
"I am a man under authority, with men under me. I say 'go' and they go and say, 'come!' and they come. Just say the word, and my servant will be healed."

So, I started with that: the things of God don't always make human sense, so we choose to do what He says as an act of personal discipline, even if that's all it is, at first.
I reminded him that he chose this new Captain, this King, and that this was the direction he was given.
My friend accepted that as a place to begin, and stepped forward on the next part of his new path.

I still felt like my explanation was lacking. It really said more about my friend's faith than my wisdom, that he'd accepted it as enough.
Then, a few church services ago, I pulled out the insert in the announcement bulletin--the one with all the little Q &A's , and pithy columns, that everyone glances at, and throws away.

A board member was still reciting bits of churchy news, so I gave the little pamphlet a second look, and stopped. I read it again. This week's question was about....what forgiveness isn't. That was new.
And it made so much sense, I kept it and read it again, at home.

It said, simply:
Forgiveness doesn't ever mean that what the other person did was okay.

If someone shot you, or ran you over, if your marriage fell to infidelity or addiction, or someone you trusted stood you up on a hot call--that happened.
Consequences echo in the physical world; forgiveness is in your heart and mind.

Forgiveness doesn't mean you have to trust the other person.
In my friend's case, that could never happen anyway-- most of the people he was still angry at, were dead.

Forgiveness doesn't always mean you have to reconcile; sometimes that's not possible, and sometimes it's not safe or healthy. God expects us to be wise. 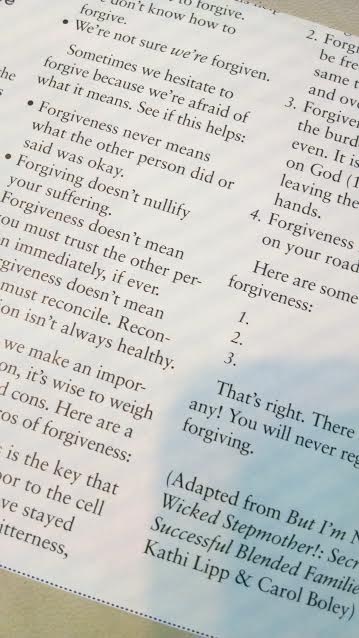 Knowing what I didn't have to do made forgiveness easier to accept, and a lot easier to understand.
From personal experience, grudgingly at first (okay,fine, for months ) praying for people who had caused our family harm---the kind that makes bad dreams, and interrupts careers-- we had learned letting go of anger and bitterness meant new peace in our minds, and in our home.

You would never continue to wear your body armor and duty belt when you retired. You don't need it any longer, and it's heavy.
It digs in all the wrong places, and you can never forget that you have it on. Over time, the weight damages your back.
You don't have to carry the things from the past that you don't need any longer, either.
That's why we're told to forgive, even--especially--when the other person doesn't deserve it.
It's not about them. It's about what permits us to heal, and become who we're meant to be.

My friend never needed that brilliant little epiphany, by the way.
He's run far ahead, growing in peace and wisdom that few men of his years and his past get to know.

I was the one who still needed the explanation.
And, there it was.