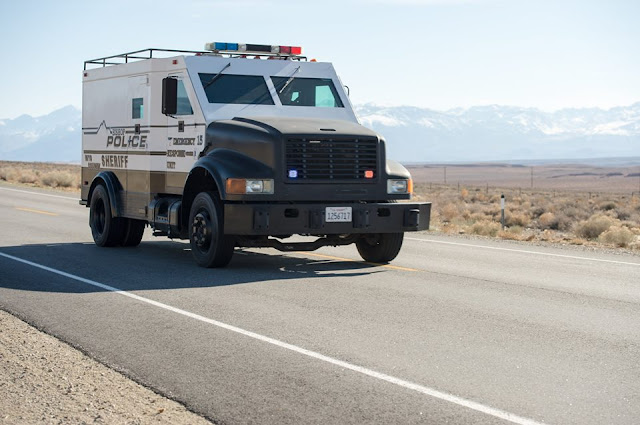 One of the bloodiest ambushes since July 2016 left seven officers bleeding and helpless in a giant field of fire, until an ugly old MRAP rumbled onto the scene, providing cover to evacuate them.
For one veteran Florence officer, it was too late.
Another fought mightily, and succumbed to her wounds two weeks later. The rest recovered as best they could.
Less than six months later, in an even smaller South Carolina town (Huger, population 3000-ish), a traffic stop in a rural neighborhood turned into a gunfight.
A solo officer was pinned behind his vehicle for half an hour, until yet another MRAP made its slow and homely way to his rescue.


Bad guys have always used the best technology available to them at the time.
It stands to reason that police must, as well.
In the early 20th Century, as gangsters and organized crime made use of the best tech money could buy, manufacturers made sure law enforcement could access it, too. 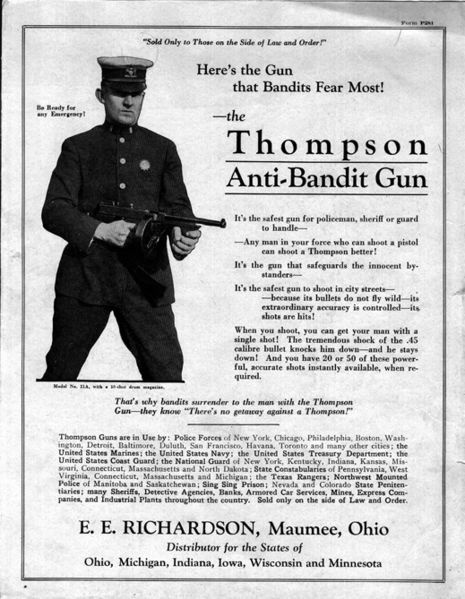 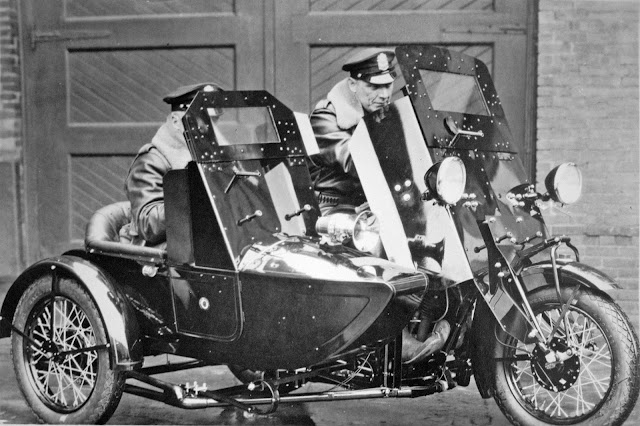 News and commentary critical of the 1033 Program emphasizes "grenade launchers", "machine guns" or "tanks".
Ignoring, for now, that an armored vehicle is not a tank, never mentioned are the other "militarized" items available under the program :
sleeping bags, cots, water filters, camel backs, rain jackets, or night vision goggles--- all items designed for and supplied to the military, and once again available to law enforcement, with minimal cost to their communities.
All of this gear, by the way, is used for health and safety applications; it's protective, and defensive, not offensive.
As much of it gets used to safeguard local citizens as their police: MRAPs are used all over the country for evacuations during floods and after hurricanes,and to safely remove innocents from active shooter scenes.
For that matter, even armed standoffs have a chance to resolve peacefully if officers have enough cover to wait them out in relative safety. If a bad guy's life can also be saved because police have better equipment, where exactly is that downside? 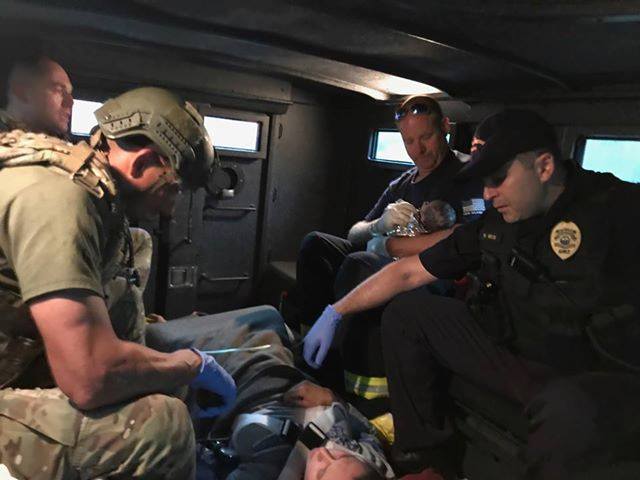 Better equipment means better response, to any situation.
A pair of NVGs saved two Washington state deputies from ambush. In a place with no streetlights or backup, a domestic violence call in progress means responding officers need every possible advantage.
What reasonable person denies officers the ability to see on a dark night, because they don't like the way the goggles look, or who paid for them?

I can think of three officers saved by their helmets in 2016 and 2017, alone.
(Los Angeles, Orlando and Tulare County, if you don't want to look them up yourself.) 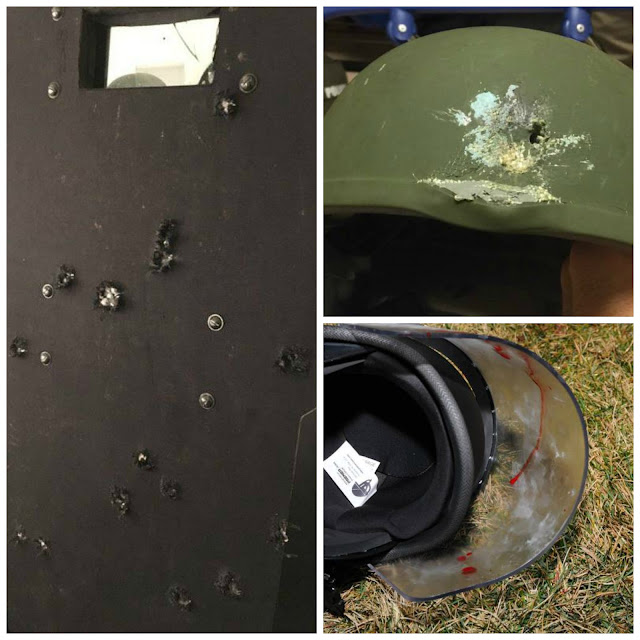 Any worker doing a job needs the correct tools to do the job proficiently.
If it's a hazardous job, it is ethical and moral to ensure they have the equipment to do that job as safely as possible, as well.
Assuming that a North Hollywood -style robbery won't happen again is silly.
Assuming that the U.S. is immune from a Beslan or Mumbai-style terrorist attack is, at best, ill-informed (although on hard days I may envy your optimism).

France, Belgium and other European countries respond to terrorist attacks with actual military, and their police have the safety equipment they need. (You DID see the picture, up there, of that body bunker from the Bataclan entry? )

Unlike Europe, in the U.S., the Posse Commitatus Act precludes military response to any attack on our soil that may involve our own citizens.
National Guard takes days to mobilize.
Therefore, local law enforcement will be the first responders to any violent threat.
Since this is the case, they need the equipment to respond effectively, and with a chance of surviving that response.
Dead and wounded officers cannot stop an attack already in motion, and they cannot defend their communities, either.
Rather than protecting anyone else, they're now a strain on resources, and a distraction.
If you want effective response, your officers have to be able to stay in the fight.

If U.S. citizens insist on pretending that Mumbai and Beslan (and Paris, and Brussels, and...)can't happen here, then they don't get to say "You should have done something" when they don't like the outcome.
And they get to take the blame when those who do respond reap the whirlwind , unprepared and ill-equipped.

I don't see "militarized" . I see "PPEs".
I see loved ones home again, safely.
I see officers who can wait out a barricaded subject.
I see safe evacuations during floods, blizzards and active shooters.

And then I see a lot of critics who never take a risk that doesn't involve their paycheck.
I see people who complain that the stuff is scary looking.
They don't like camouflage.
Their officers 'shouldn't look like soldiers'.
The scary Feds shouldn't provide surplus equipment to their local cops.
Well, then, ladies and gentlemen, pony up the funds to equip your officers with the appropriate gear your own selves, and you can paint that $350,000 Lenco Bearcat pink, if that makes you feel safer.
Buy the rifle plates and carriers yourself, and have your officers put unicorn morale patches on them. I don't care.
But these ARE your tax dollars at work, already bought and paid for.
Might as well use it wisely. 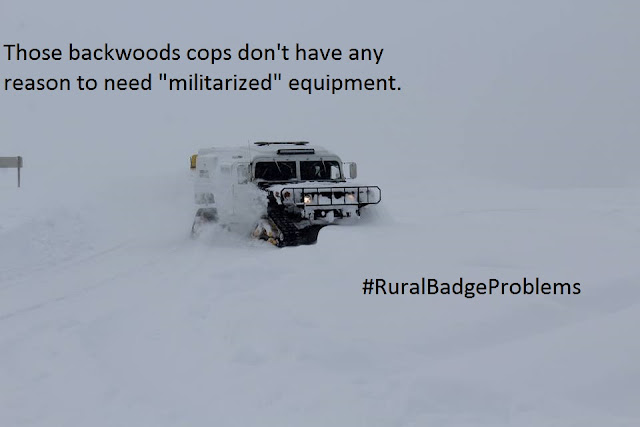