To the Deputy in the Shooting Yesterday

Dear Deputy,
A reader sent a headline to my inbox yesterday. It didn't say much, yet, but it was about you.

You are the deputy who shot a gunman in a remote little lake resort yesterday.
I don't know you, but I know your life.
It's my family's life, and we've walked your walk.

You work alone.
You're always far from backup.
Your radio doesn't reach dispatch, as often as it does.
Nearly everyone you contact out here in the country is armed.
A lot of them have rifles, and you know your vest doesn't stand a chance.
Your department doesn't have body cameras, or dash cams, and they don't send you to training often enough, or have range except when you're qualifying, so it's all on you.
And yesterday, it was all on you , again. 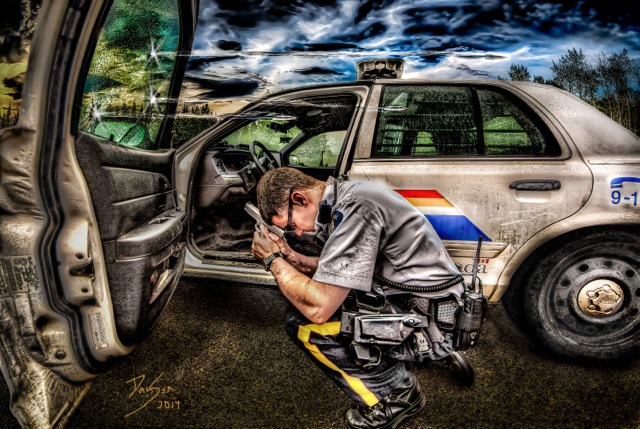 When you could go home, you were exhausted and keyed to the breaking point---but you went home.
Your friend who's a deputy too, drove you and stayed with you for hours; he sat where you could see him, so you'd feel safe and finally get a little rest. Every time you opened your eyes, he was there.
You'll never forget him for that.
Eventually he had to go home, though ; his wife had to go to work, and there's no childcare provider in this small town who works her shift.

Maybe you shook or threw up, once you knew no one could see you, except your wife.
She doesn't care; you came home.
You held each other that night instead of sleeping, and wondered if it was okay to cry now, or if you shouldn't, because maybe you wouldn't stop. No one ever trained you for this part---everything up to pulling the trigger, sure.
Not a thing for anything after that, so , you just don't know.
But you did come home.
She looked at your hands, and in your eyes, and wondered if you were different, now that you'd killed someone. Then she felt weird for thinking about that, even to herself. Who thinks that? Who ever has to?
Yes. You will be; but you're still you, and you came home.

People you work with don't know what to say.
One said 'Congratulations, great shot.' That was awkward.
A lot of them shook your hand, and a few patted you as they walked by,and nodded, and tried to decide whether to make eye contact. A dispatcher hugged you, and she cried. And then, she walked away as fast as she could.
They're glad you came home.
But, they don't know what to do either. No one trained them for this.

There's only one grocery store; while your wife is waiting in line there, she'll hear two women in front of her talking about 'what you should have done.'
Her cheeks will burn, and her eyes will narrow and fill with angry tears, but she won't confront them.
And she'll never forget it.
She'll buy her fresh green beans, and chicken thighs, and juice boxes, and head to the car in the rain, rehearsing all the things she could have said to them, but didn't.
She'll tell you about it later, words like automatic fire, and you won't know what to say back.

You'll be criticized and second-guessed online, by people who weren't there and didn't have to make that choice.
Teachers will talk about the suspect, no matter how long ago he graduated, and insist there had to have been some other resolution.
Even though the toughest choice they ever faced was whether or not to send that suspect to the office, they'll still talk about what you should have done, when the choice the suspect gave you was 'die' or 'shoot him instead'.

It's not fair. That's okay to think.
You did deserve better. It's okay to be angry, at least for now. The final choice was in the suspect's hands, not yours.
You did your best.
It's okay for your wife to be angry, with the suspect, with anyone who speaks badly of you. It means she loves you.

Remember, you came home. Start there.

When you have your fitness-for-duty evaluation, and they send you back on the road, if your sheriff is lazy and doesn't find resources to help you find your new normal, find them your own self.
The interwebs are an infinite resource. I wish we had had it, when we walked your walk.

There's Cop Church , and they're always there. You can call them, and email them, and their messages stream online and in podcasts. They're real people, cops like you, with families like yours; it's just that they're ministers and counselors, too.
Trust me, the nice marriage and family counselor in your little town has no idea what your life is like now. 'Police stress' is not a relationship problem, but it can make one.
We already tried that, so I'll save you and your wife that step.

There's Under The Shield Foundation , and they're always there. They know stuff, and they know people, and they exist to help you find the right ones.

There's The Wounded Blue , and Call4Backup, too, and Safe Call Now --- some professionals, some peer support, all confidential, all there for you.

And there's the First Responder Support Network , too, on the west coast. I really, REALLY wish I'd known about them.
You're not alone. I promise.

You'll discover other officers right where you live, ones you never knew much about before, have been in shootings, too.
They just don't talk about it much. If they reach out, reach back.
They won't offer if they don't mean it.

And they know some things you'll face weeks or months from now, when everyone else acts like they've moved on, or that maybe your trouble is contagious:
They know you're not crazy, no matter how you feel.
They know it's normal to have an abnormal reaction to an abnormal event.
They know this won't last forever.

You don't have a peer support system, or critical incident management team, or a chaplain. We didn't either.
Ultimately, it was faith and family who brought us out the other side.
You're just starting down this road. We walked it.....well, a long time ago. But we're still standing, and so will you. 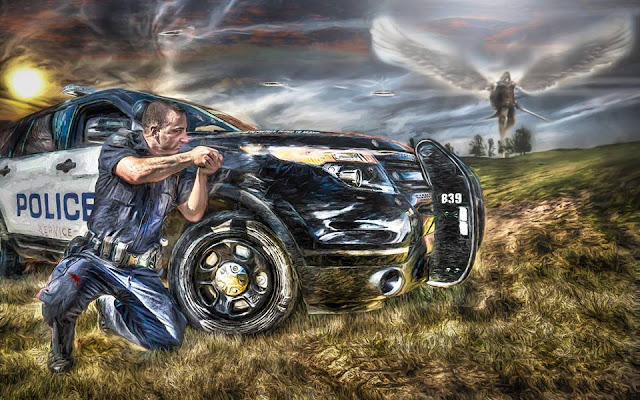 Psalm 91
1 Whoever dwells in the shelter of the Most High
will rest in the shadow of the Almighty.
2 I will say of the Lord, “He is my refuge and my fortress,
my God, in whom I trust.”
3 Surely he will save you
from the fowler’s snare
and from the deadly pestilence.
4 He will cover you with his feathers,
and under his wings you will find refuge;
his faithfulness will be your shield and rampart.
5 You will not fear the terror of night,
nor the arrow that flies by day,
6 nor the pestilence that stalks in the darkness,
nor the plague that destroys at midday.
7 A thousand may fall at your side,
ten thousand at your right hand,
but it will not come near you.
8 You will only observe with your eyes
and see the punishment of the wicked.
9 If you say, “The Lord is my refuge,”
and you make the Most High your dwelling,
10 no harm will overtake you,
no disaster will come near your tent.
11 For he will command his angels concerning you
to guard you in all your ways;
12 they will lift you up in their hands,
so that you will not strike your foot against a stone.
13 You will tread on the lion and the cobra;
you will trample the great lion and the serpent.
14 “Because he loves me,” says the Lord, “I will rescue him;
I will protect him, for he acknowledges my name.
15 He will call on me, and I will answer him;
I will be with him in trouble,
I will deliver him and honor him.
16 With long life I will satisfy him
and show him my salvation.”

You're home. You came home.

There's a list of 'Dangerous Jobs' on the internet.
You know the one: every keyboard commando and cop hater on the planet keeps it bookmarked.

All honorable and necessary professions.
All risky. No argument there.
But that's not the point, at all. There IS a point, and people who compare those risky, honorable professions to the hazards of law enforcement are missing it.
The refrain is getting old --
"Being a cop isn't even dangerous. More (fill in the blank with career choice) die every year than cops."

Way to misuse statistics.
Without getting into a lecture about trendlines, working analogies, margins of error, gross numbers vs. per capita or per hundred-thousand, and the like, let's just get to that point.

Casualties in all those other occupations represent industrial accident.
No crab pot, bucket of hot tar, snapped cable, or toxic manure pit sets out to kill the fisherman,roofer, logger or farmer because they're at work.
Trucks don't jack knife because they had a bad driver once, their truck friend got impounded last week, and this driver said something they don't like.

There's nothing personal about mechanical failure, or the fact of gravity.
Malice is the exclusive purview of humans.
Some police officers die in very sad accidents, or of the frailty of their regrettably human bodies.
The rest are murdered.
It's not the same, at all.

There's more to that refrain up there ^^ It goes like this:
"But fewer cops die in the line of duty now than ever before in history!!"
And that's true.
It's also true that fewer infantry soldiers and Marines die in combat than ever in history, and for the same reasons, but no reasonable person argues that war is 'safe'.

So, what are those reasons, anyway?
1. Ballistic armor, and 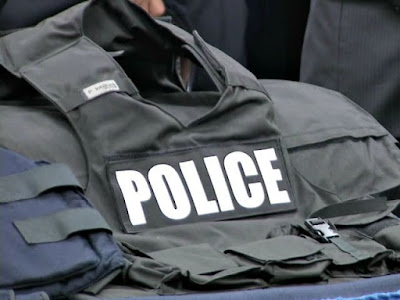 I know I said I wouldn't talk about trendlines, but here's one anyway.
Take a look. 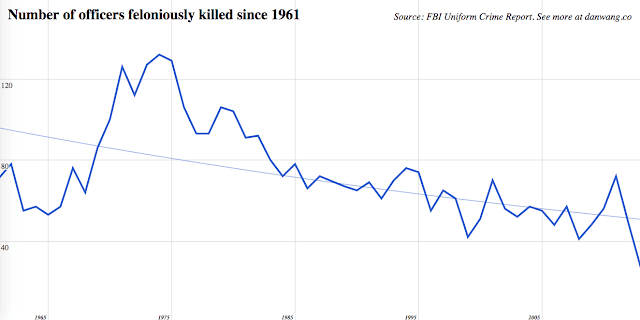 See when that trend peaks, and then really starts to fall? That's the mid-1970s, when ballistic armor first became widely available for law enforcement agencies to purchase.

When you can look at numbers reflecting officers attacked who survive, the numbers are holding steady, for years now.
In fact, between 2003 and 2014, while workplace injuries decreased for all other job fields, injury rates for law enforcement rose , with the leading cause deliberate attacks and assaults. A study by the National Institute for Safety and Health demonstrated that cops are three times more likely to sustain non-fatal injury than all other U.S. workers.
There are thousands of officers, and their families, who face down life-altering, sometimes career-ending, wounds every year, utterly unnoticed by the public.

They're real, with real people who love them, the ones who fall, and those who survive to battle on. 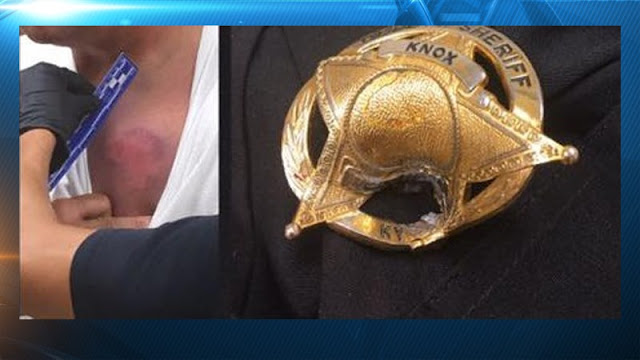 Posted by Charlie Pitt at 05:00 5 comments: Links to this post