The Officers We're Leaving Behind on Peace Officers Memorial Day 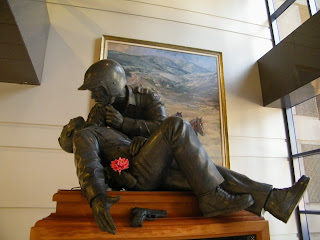 Peace Officers Memorial Day was established in 1963 by President John F. Kennedy.
Every year, officers killed in the line of duty are honored at the national memorial in grand and solemn ceremonies.
Their survivors are offered solace, closure and promises of support. Their heartbreak is seen and publicly acknowledged,surrounded and supported by a sea of blue.
This is as it should be.

The intent of President Kennedy's proclamation goes further, though.
We've ignored what he intended for this day, and thousands upon thousands of officers and their families pay the price for that omission. 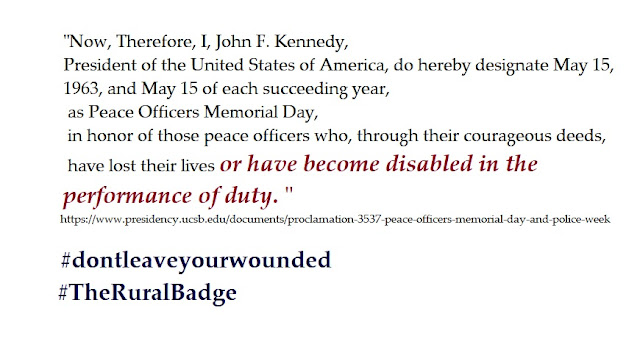 Read that excerpt again: Peace Officers Memorial Day, Police Week, all of it, was intended from the beginning to honor both fallen officers, and the disabled who survive.

We aren't doing that, yet.
Too many officers are met at the hospital with assurances that "we've got you", that "we're with you" and that "no one fights alone", and then...they're left alone.

They're left alone by the people who swore they'd follow them into the fire.
That promise rings hollow when their real concern is health insurance, a vehicle they can drive, a doorway they can navigate, loss of income, loss of independence.
It rings hollow when the people who would take a bullet for them stop calling because it's hard to visit a reminder of what can happen, so fast.

The single biggest myth about policing is that some "system" magically kicks in when they get hurt.
The truth is isolating, expensive and painful: there is no system.
Every wounded officer is left to struggle on his own.
Every agency, every city and county, township, parish and state, is making this up as they go along, and it is the wounded officers who pay the price for their shortcomings.
Hollywood perpetuates the myth, depicting injured officers returning to duty by the next scene, the next episode, with an emotional sprinkle of folded flags and bagpipes.

A disabled officer told me once, "If I had died, I wouldn't be a burden."

Until no officer feels that way again, something remains missing from Police Week.
Remember the fallen.
Comfort the bereaved.
Walk alongside your wounded and disabled.

This in how you honor them all, this Peace Officers Memorial Day.